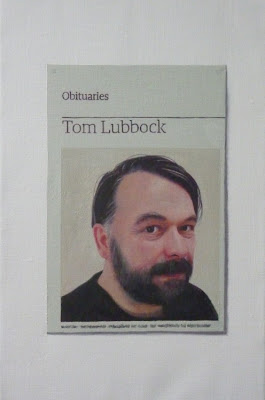 In Giovanni Bellini’s 1501 portrait of Doge Leonardo Loredan, the sitter is compressed behind a stone parapet, his arms invisible to view. Deprived of the agency of limbs, the Doge is pinned in place, reduced to a bureaucratic chess piece. His face, hard lit from the left, is unmistakeably skull-like. His body barely penetrates the shimmering carapace of his damask gown. This is a man filling a recently vacated uniform, carrying out the necessities of his role, before the shadows that creep across his face finally take him. Bellini’s portrait implies the presence of death, and its assiduous realism is a declaration of faith in the afterlife. Portraiture was supposed to capture every crow’s-foot, every furrow, to retain the subject as focal point for posthumous prayer. In the centre of the parapet, Bellini paints a startlingly realistic piece of unfolded paper, called a cartellino, apparently pinned to the wall like a Post-It note, that he uses both as a place of signature and as a kind of assurance that this is really what he saw. The paper in the painting is a kind of confirmation, like a receipt, that an action took place in the world. This man sat here, looking like this. The light fell like this.

Hugh Mendes’ paintings belong to the tradition of Bellini’s painting in several important ways. In his Obituary paintings (2009-2012), a piece of paper, like a solitary cartellino, is centred against a stark white background. A tiny rim of shadow passes along two sides, so the paper is evidently within the fictive space of the painting itself. (The implied space of Mendes’ paintings is starkly forensic, with something of the CSI lab about their blank white backgrounds). Each piece of paper has ostensibly been carefully snipped from its newspaper source (in Mendes’ work, the clippings derive exclusively from The Guardian, after a few years of working with The Independent), and features both text – the name of the deceased – and image – their photograph. Take Mendes’ image of Steve Jobs (2011), for instance. The headshot shows Jobs looking, like Loredan, to our left; and although the wrinkling of Jobs’ face reflects the candour of the original photograph, not the desire for celestial redemption, there is a resonance between the two images that implies a continuity of intention between the two painters. Both Bellini’s and Mendes’ paintings perform a kind of pictorial entomology: the subject is pinned into the space of the image, in order to represent something in an implied larger taxonomy of subjects – doges, CEOs, celebrities.

Yet Mendes’ paintings are really only portraits at a remove. Strictly speaking, they’re portraits treated as still lifes, paintings of photographic images made distant in the retelling. And the photographs themselves have an implicit distance from their subjects: they’re headshots selected for their likeness, or ability to capture the essence of what makes that person worthy of remembrance. A succession of visual choices creates a crowded back-story in any painting by Mendes. Each one bears an important question about an individual’s relationship with the tangible world: is this really Steve Jobs? Or Richard Hamilton? Or Elizabeth Taylor? In Mendes’ work, still life – a genre that celebrates the tangibility of the physical world, the quiddity of things – becomes vexed, unsure of what it’s able to do. Mendes gives still life an identity crisis.

Mendes’ paintings are above all acts of preservation. Each Obituary is pictorial aspic, preventing the yellowing of the printed image through painted reproduction. And since a clipping from a newspaper plays out its own transience as news through physical decay – in other words, is an advertisement for its own impermanence in a way a web page isn’t – Mendes’ paintings represent small moments of transcendence. Mendes’ image of Lucian Freud (2011), for example, depicts a chiaroscuro headshot of the late painter, in perhaps unwitting parallel with Renaissance portraiture. In the artist’s studio, the original clipping fades on the wall, like an inverted Picture of Dorian Gray, while the painting retains the paper’s defiant flatness and crispness. (There is no impending decay in Mendes’ work, as there might be in an image of a basket of fruit: their fields of uninflected white space suggest an extra-temporal situation, a lack of air). As in Wilde’s book, though, the cost of preservation is a form of ghostliness, a sort of inauthenticity. The head on Jeremy Bentham’s embalmed body at University College London had to be replaced with a wax replica; it still looks like him, but it isn’t him (the head is kept in a jar by his feet). Mendes’ paintings enact the strange paradox of posterity: in order for something to stay the same, it must change.

Hugh Mendes’ paintings are images not of people, but of people in the act of being remembered. His work’s re-enactment of memory is there in the tension between precision (the careful transcription of the photographic source) and fuzziness (the lines of text, reduced to just-illegible lines of dark grey). What looks painstakingly precise is continually tempered with a painterliness that stands for uncertainty: the slightly fogged text is like that seen in a dream, a hazy mesh of strips that never quite coalesces into writing. Implied in this approach is a yearning held at bay by an absence of complete knowledge, an attempt to communicate in a language you haven’t quite mastered. In Mendes’ 2011 image of art critic and artist Tom Lubbock, the act of translating the photographed face into paint replicates the intense scrutiny of the one left behind, like a loved picture in a locket, as well as reflecting Lubbock’s own penetrating analysis of paintings in his writing. In this sense, Mendes’ Obituaries are suffused with the hidden presence of the artist himself, gazing, as though remembering, at the image on the studio wall, while it imperceptibly deletes itself before his very eyes. Like Bellini’s painting, Mendes’ image of Lubbock is a testament of something having been seen. The act of seeing creates an immortality, of sorts. This paper was here, looking like this. The light fell like this.