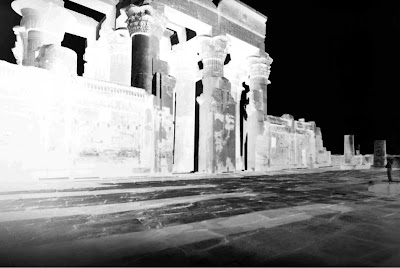 Vera Lutter made a camera obscura out of an old leather suitcase and took it with her to Egypt, surreptitiously making images of ancient monuments (local laws being fairly punctilious when it comes to photography). The intrepid Tintin-meets-Capa narrative is a reminder that the romanticism thoroughly leached out of conventional ‘fine art’ in the 1960s still has a home in photography. Curled at their edges, intimate in scale, their clandestine provenance becomes part of the meaning of each work. The resulting negative images are as unsullied a representation of the pure photographic image – photography as ‘light writing’ – as a fixed image can be. Lutter’s photographs are, in other words, what images look like before language makes sense of them, and her practice involves geographical locations that are swamped and steeped in language: Manhattan, Venice, Egypt. Unphotographable places.

Read the complete piece at Art21 here.
Posted by Ben Street at 12:27 No comments: 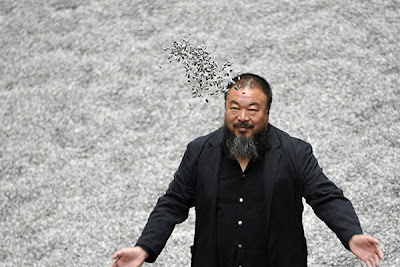 When an artist dies, their work changes forever. Whatever it was they were doing at the time of their demise becomes loaded with retroactive meaning and spurious clairvoyance. With the exception of works knowingly produced in the inverted shadow of suicide – Rothko’s hyper-bleak late-60s moonscapes, almost anything on In Utero – most “late works” (in Edward Said’s famous designation) aren’t made with the intention of providing a tragic coda to a life lived publicly, but can’t help but acquire new meaning by virtue of their proximity to death. Painting especially does this: looking at Titian’s astounding Pieta, left unfinished at the time of his death in 1575 and completed by an assistant, it’s almost impossible not to be moved by the thought of the artist’s plague-crabbed fingers dragging pigment across the corpse of Christ. Even Duchamp’s Etant Donnes, designed in secret while the artist had nominally quit art to concentrate on chess, manages to acquire a funereal resonance in its evocation of a tomb (perhaps even The Tomb). David Foster Wallace’s recently published posthumous novel The Pale King will, as I write, be being scoured for allusions to his 2008 suicide, as though his life were lived backwards. In effect, all these efforts are part of the perennial human project to find meaning and pattern in the messy, unmanageable stuff of human existence.

Read the complete piece at Art21 here.
Posted by Ben Street at 13:38 No comments: