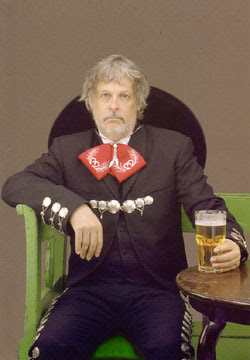 Mark Wallinger at Anthony Reynolds and Rodney Graham at Lisson. Read "In the Loop" here.

Christian Marclay's 'The Clock' at White Cube. Read "The Time of Your Life" here.

And here are some other things.

On contemporary art's debt to Mannerism. Read "To the Manner Born" here.

On Tate Modern at Ten. Read "Tate at Ten" here.
Posted by Ben Street at 15:03 No comments: 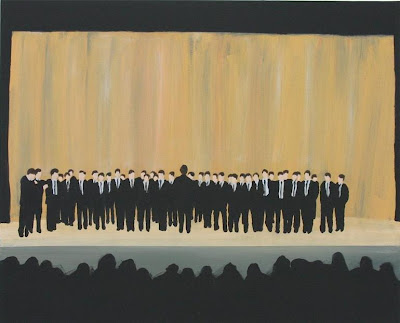 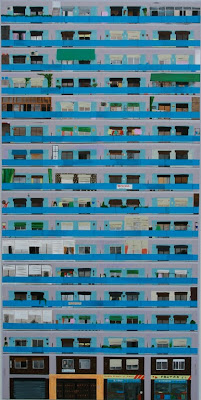 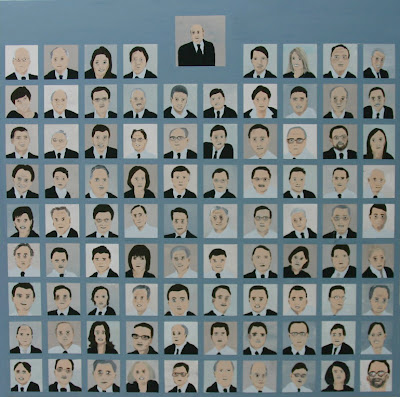 Daniel Rodriguez’s paintings of groups and grids of people and places are all about human systems of organisation: parking spaces, employee charts, school graduations and reunions. Each painting takes a distanced view on its subject, both in compositional and in formal terms. ‘Edificio’, a painting of a modernist apartment block complete with hanging laundry, bikes and pot plants, is shown in its entirety, as though at long range, and rendered in a characteristically washed-out and flattened brushstroke in chalky pinks and blues. That distancing (in one work, ’Marcha’, a large crowd is seen directly from above, as though through the eyes of a pigeon contemplating its next target) shouldn’t be mistaken for coldness, though, as it might be in the works of other painters working in a similarly tentative, faux-naive style. Rodriguez’s works are full of a kind of warm amusement, a sort of fascinated attention to the habits of human beings that is both empathetic and oddly alien.

In ‘Reunion’, a grid of headshots (evidently drawn, however loosely, from a photographic source) sits on a light grey ground, like a corporate advent calendar (Christmas Eve: Helen from HR; Boxing Day: Roger from Retailing). It’s one of many winks and nods in Rodriguez’s work towards the kind of hardcore asceticism of modernist painters like Agnes Martin or Sol LeWitt. You might say that the grid, paragon of hands-off seventies conceptual art, is the butt of the joke here, and Rodriguez’s aerial shots of car parks (complete with cack-handed alignments and nudging bumpers) work as sly parodies of that sort of high-minded practice. You could even see those blanched and stiffened faces as headshots of the upper eschalons of the contemporary art world, each one an uncomfortable bureaucrat with a bad tie.

However, Rodriguez’s works are more than mere in-jokes: each painting is a small celebration of the various real (as opposed to virtual) communities that form an ordinary life. Look at the painting ‘Amigos de la Tierra’. A gathering of studiously casual people (employees, it’s assumed, of the eponymous environmental charity; a blaring green background makes the point pretty clear) are seen from above. The source must be a photo taken from a balcony or second-floor window, perhaps to be displayed in the office’s reception area. The employees squint and rock on their heels while waiting for the signal to disperse and get back to work. Like a bisected anthill, the painting records an exposure of the realities of any corporate organisation: that it’s (horrifyingly) made up of people like you. And the title of ‘Empleados del Mes’ – ‘Employee of the Month’ – initially surprises: each face is rendered with gleeful satirical detail, so that the parade of boss-eyed and bad-haired heads looks more like a police line-up or sex offenders register. Yet as with all Rodriguez’s works, it’s ourselves we see reflected back, however painfully. As Demetri Martin says, “’Employee of the month’ is a good example of how someone can be a winner and a loser at the same time”.

On 'Fresh Hell' at the Palais de Tokyo, Paris 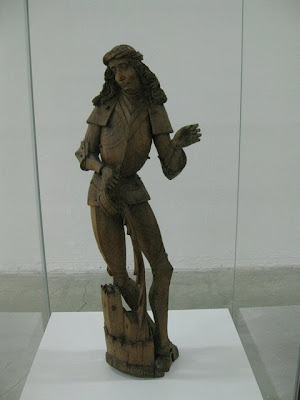 It is a truth universally acknowledged that artists make the best curators. Mark Wallinger’s exhibition, The Russian Linesman at the Hayward Gallery last March, was a proposal about what creative curatorship might actually mean – a bringing together of historically or aesthetically disparate objects which generate unexpected “sparks of poetry” (pace Max Ernst). Adam McEwen’s show, Fresh Hell at the Palais de Tokyo in Paris, is a continuation in the same spirit. Drawing on the intellectual dilettantism of the way we collate and digest information these days, and the increasing anachronism of academic specialization, McEwen’s show is a wildly disparate generator of transhistorical energy, epitomized in its display of Walter de Maria’s 1967 High Energy Bar. Set into the wall in a brightly-lit vitrine, the work – a footlong steel bar, glowering with condensed power – is the fulcrum of the whole exhibition, an object whose aesthetic and actual density lodges it in place against the onrushing stream of history. 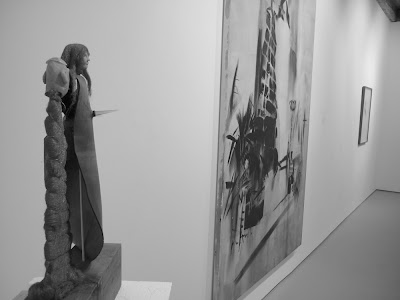 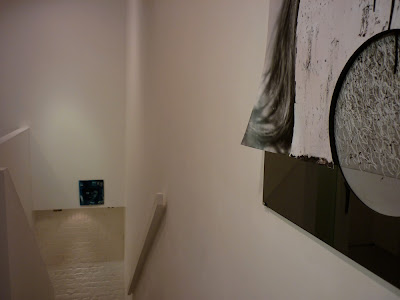 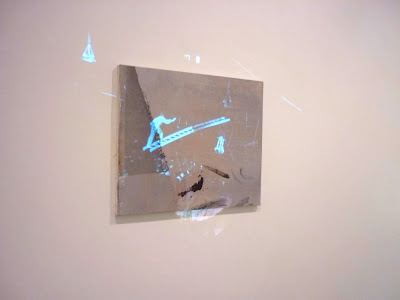 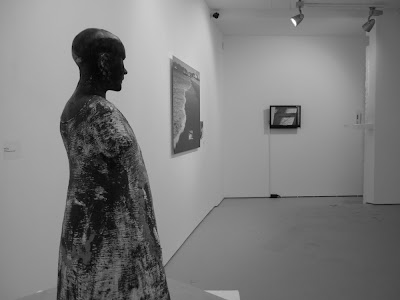 Great installation shots of 'Gifted' by Corrina Spencer
Posted by Ben Street at 04:20 No comments:

On Art and Tuition Fees 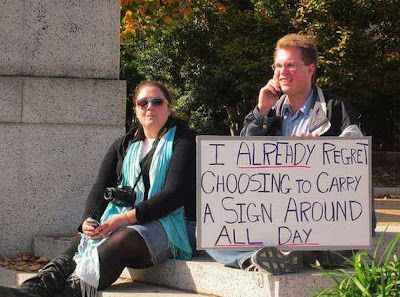 This week, Britain’s coalition government (narrowly) passed a proposal to dramatically hike university tuition fees, the results of which were a number of occasionally violent protests in central London. The Conservative party HQ, a modernist tower block at the edge of the Thames, was broken into and occupied by protesters, some of whom lobbed down fire extinguishers at the police below. Bottles were thrown at Prince Charles’s Rolls Royce as it sped through central London, smashing a window and leading to a proposal that he ditch the vehicle for his own safety (yes, that extreme). Protesters swung from the Union Jacks that hang from the Cenotaph, the war memorial near the Houses of Parliament. Graffitied cocks disfigured the public statues. In the frosty morning light, Parliament square looked like a cross between Helmand and Glastonbury.

The problem with protests of this sort is that it’s all too easy to take binary political positions that caricature the opposition or romanticize the nature of the thing. Plenty of the protesters weren’t, in fact, students, but it’s expedient for those who opposed the protests to describe them as such (thus, by lazy association, belittling the seriousness of their position). It’s also useful that there is a violent minority prepared to smash up police cars and spray genitalia on bus stops, so that resonant photographic images can be used as ballast for the opposition. On the other hand, many of the protesters seemed (judging by the slogans on banners ditched in bins or broken in the gutters) to see themselves as latter-day sans-culottes, for whom the issue of tuition fees was of a piece with the war in Iraq, the occupation of Palestine, and the creeping evils of capitalism, rather than being the misguided piece of legislation that it is. And yet the protests matter, and they matter for art and its future, and anyone with an interest in art ought to be taking a close interest.

Read the rest here.
Posted by Ben Street at 08:51 No comments: 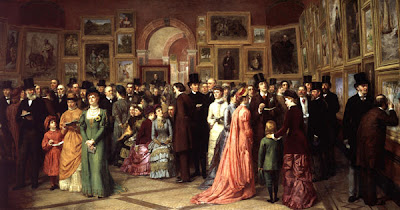 This Saturday's opening of 'Gifted' [image above] was very well attended and the show looks great, thanks to phenomenally talented artists (all of whom excelled within the premise of the show) and extremely supportive and able gallery staff. Thanks to all who attended and helped out.

'Gifted' is dedicated to Rebecca Naussauer. [Read my piece on her work here]. A percentage of the sale of every work will be donated to a children's cancer charity.
Posted by Ben Street at 05:01 No comments: 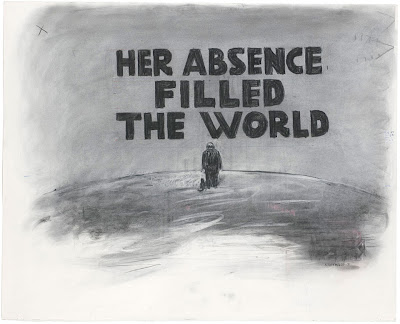 Watching a William Kentridge animated film is like being read a meandering story that the teller only half-remembers. Some parts of the tale are repeated, some are ditched, some take an unforeseen turn, and others accrue meanings the teller himself couldn’t have planned. As with many artists working within the shadow of a brutal historical situation – be it the Dada artists creating absurdist “anti-art” as World War I began or the Surrealist Max Ernst subverting linear plotlines in his collage-novels made during the birth of Nazism – Kentridge tinkers with the tools of narrative to create pointedly absurdist satire. The long shadow cast over Kentridge’s work is the history of apartheid in his native South Africa, which informs both his subject matter and his approach to its articulation. Things appear to make sense, then don’t. In Ernst’s 1933 collage-novel, Une Semaine de Bonté, for example, repeated visual motifs and chapter headings point to a coherence that’s never actually fulfilled, in a parody of the societal reorganization proposed by the then-ascendant Nazi party. Similarly, the reappearance in a number of Kentridge’s works of two characters, Soho Eckstein and Felix Teitelbaum, suggests an episodic structure to his body of work as a whole, but as with his artistic predecessors, subverting expectations has political meaning. For Kentridge, character is the crucible by which he explores the history of a national trauma.

Read the rest of the essay at Art21's new Kentridge website here.
Posted by Ben Street at 00:42 No comments: