UPDATED: 'Spoils of War': Jeremy Deller at the IWM 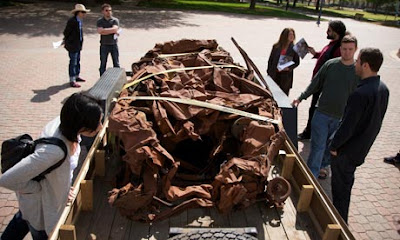 There’s a new display at the Imperial War Museum, London, orchestrated by the artist Jeremy Deller, which consists of a burnt-out, red-brown car, mangled in an an explosion in Baghdad in 2007. Note that cagey indefiniteness, the tiptoeing choice of words. Deller’s project is as much an examination of the real cost of war, surrounded as it is by displays of warplanes and warheads, as it is of the language we use to describe it. It’s not an “installation,” it hasn’t been “curated,” and it’s not (according to the artist himself), even an “artwork.” It’s not, in other words, “by” someone, and what it’s about is, in part, the idea of authorship, and the meaning of authorship in a context of modern warfare. Deller’s disavowal of the word “art” to describe the car – which does have a title (5 March 2007), and was displayed in Deller’s show It Is What It Is at the New Museum, New York, last year, so has all the hallmarks of being a work of art – has parallels with the perhaps apocryphal story of the Gestapo officer stalking through Picasso’s studio, chancing across a postcard of Guernica, and asking the artist “Did you do that?” “No,” replies the artist, “you did.”

The rest of the piece is here.

Links and kind words from

Andrew Sullivan at The Atlantic

Luke Stacks at Provisions Library
Posted by Ben Street at 08:06 No comments: