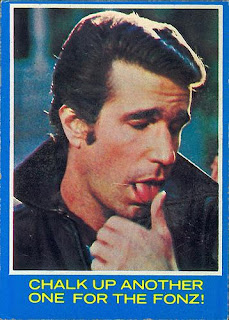 A new thing here, about cool Americans and the art they make.
Posted by Ben Street at 11:46 No comments: 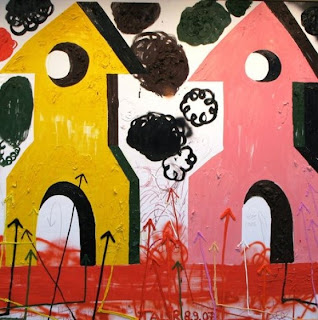 Another dusty thing that might brighten a dull blind date or queue at the tanning salon.
Tal R's new paintings at Camden Arts Centre use seven unmixed colours - pink, green, orange, white, brown and black - on a standardised scale of 8 foot by 8 foot. That this description recalls the careful allocation (and the colour scheme) of chips or pieces at the start of a board game, the equal laying-out of cards, links his work with a peculiarity of contemporary painting: self-regulation as artistic gambit. This ludic approach to decision-making informs the work of several contemporary painters to the extent that it is a defining characteristic of painting now. Like Tal R, Trenton Doyle Hancock, Dana Schutz and Tomma Abst treat the painted surface as a boardgame bound by a specific set of rules.  Yet these imposed restrictions aren't those of (say) Robert Ryman's monochromatic canvases; rather, they speak to an absurdist specificity that aims to debunk the lofty purism of modernist abstraction.

Tal R's paintings filter the CoBrA legacy of his adopted Danish homeland through the thrawn logic of the obsessive compulsive. There is something in the fat lumps of paint, larded on with a loaded brush, or sitting wormily on the surface, of Karel Appel or Asger Jorn, the trademark framed compositions of Pierre Alechinsky, his woozy way with a line. Like Alechinsky, Tal R invents a language of apparently nonsensical hieroglyphs: in Fugle og frugter, cartoon bat wings flap across a flattened space; lobed discs like rabbit heads cascade downwards. In other works, childlike perspectival tricks (clumsily rendered buildings receding to a pinprick) and dismembered cartoon anatomies (googly eyes and wagging tongues) cram into the prescribed dimensions of the canvas, like a lift before the doors slide shut.

Unlike Philip Guston, even in whose late-60s figurative work a kind of refined compositional principle still reigned, Tal R rails against pictorial niceties; he has a sort of horor vacui that compels him to cluster his paintings with piled-up imagery that crowds the horizon (he has described his own work in terms of Kolbojnik, a Hebrew term for the discarded leftovers after a meal). Paintings are cobbled together like makeshift barricades, many of them triple-layered with dog-eared canvas. The thickness of the paint sometimes resembles woven rope, like cack-handed tapestry; at an angle, the paintings have the heaving, pitching surface of a roiling ocean, bulging out from the wall in high relief, as though desperate to become objects. Some have, and sit on coloured pedestals on the gallery floor, like games waiting to be played.

Yet it all looks jokey, old masters made out of old food. Venetian gondolas, crapped out in lines of squeezed paint, wheel around a canal of smudged paint, a caca Canaletto; a scribbled Hitler furrows his brow as he paints a wild abstraction, oblivious to the comically heavy-framed paintings above him. What saves these paintings from a disinterested knowingness that characterises so many of Guston’s immediate heirs is Tal R's evident joyousness in the game of his own making, the extrovert compulsion to sustain visual interest despite his self-imposed limitation. Many of the paintings recall the stage set-ups of theatrical illusion, and it's partly in the spirit of the amateur magician that Tal R engages with the art of the past. In Night is no Black, for example, the artist sets a crowd of owlish heads in receding scale beside a wonkily receding black road. The mind reads it as perspectival, but it could be a group of variously sized owlish heads hovering around a black pyramid. Like Guston's late images of his wife Musa, gazing mutely from under the bedclothes, their eyes gaze out, unmoved, indifferent. The apparently endless sets of eyes and heads, whose combinations of unmodulated pinks, browns, yellows and whites (components of painted flesh, like a Rubens nude run in reverse) seemingly never recur, create a bouncy visual rhythm that bumps the eye around the surface like a pinball. The pyramid or road is painted in the thick stabby impasto of Clyfford Still, and like Still Tal R locates his painting somewhere in that no-man's-land where a mark flickers between nothing and something.

Yet to ignore the darker aspects of this incessantly inventive game playing is to take the artist too much at his word. To introduce a conceptual regulation into painting is to reiterate painting's ability to articulate complex ideas, despite its easy accommodation within the inherited visual repertoire of colours on a canvas. Hüsker Dü sets a series of fat, arrow-headed trees against a stark blackness around a yellow pyramidal/recessional central shape (compositional effects repeat from painting to painting: frames, pyramids, and horizontal orange strips like emergency barriers or blank subtitles). Totemic and monumental, the shape rears upwards, surmounted by a blank slit of an eye, a horror film McGuffin in a fairytale forest, or recedes into space, a yellow brick road with an unhappy ending.

Like Guston, Tal R negotiates the history of horror through the language of slapstick and pratfalls. The crushed interior spaces and ambiguous flatness of these paintings, as well as their garish unmodulated palette, are the products of an imagination grown on Itchy and Scratchy, Atari and the Brothers Grimm attempting to articulate the nameless horror of twentieth-century suffering. Name, Year, and Departure depicts two monolithic pink and yellow arrow-shaped arches pointing upwards with ferocious dynamism against a sky filled with cartoon clouds of brown and green smoke. It’s an image that declares itself with such force that it precludes the need for verbal translation, having reached a kind of perfect pitch whereby its ideas can only be explained on its own terms, with the tightly-knotted cause and effect of a dream held in the head.

Home on the Singe

Here's an old, scrappy thing I wrote that might entertain, if only for its fluctuating font sizes. 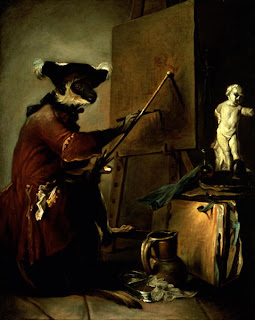 A monkey in a three-cornered hat and vast red coat sits cross-legged at an easel. This might be the start of a joke. In walks a rabbit dressed as a nurse. It actually is a sort of joke: an 18th century painting of a painter as a monkey. Trappings of the struggling artist surround him for satirical effect: a dog-eared portfolio leans against a table with an upturned wineglass and armless plaster cupid. A huge terracotta jug sits on the floor, perhaps recently drained of wine. The 18th century audience for the painting gets the joke, does a little 18th century chuckle, and moves on to something big with flying toddlers. It’s the 1740 Paris Salon, and Jean-Simeon Chardin’s The Monkey as Painter looks like an oddball choice for this slowhand arranger of dusty peaches and roadkill. What was he thinking?, they say in French in the carriages home.

It’s perhaps unsurprising, then, that the period that saw the rise of the notoriously conservative French Academy of Painting saw the resurgence of such a pointedly satirical genre. Alexandre-Gabriel Decamps’ The Experts of 1837 sets a grave group of monkey connoisseurs in tailcoats around a Romantic landscape painting in an artist’s studio; they assess its value with absurd seriousness. The natural sobriety of the simian face is exploited to obvious comic effect: the French Academy had rejected a number of the artist’s earlier works, ergo this somewhat aggrieved satiric revenge. (It’s a distant relative of Coolidge’s Dogs Playing Pool series of the early 1900s, a familiar sight for frequenters of provincial pubs). 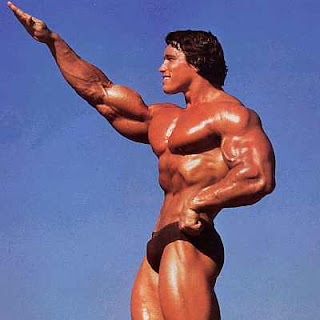 Click on the full stop at the end of this sentence for a new thing to read.
Posted by Ben Street at 10:35 2 comments: 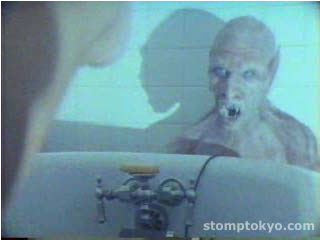 This is the text of a small piece I wrote for the memorial of Mansell Rivers-Bland, which will take place in Los Angeles at the end of this month. Mr Rivers-Bland was a master prop-maker (he worked on many episodes of Dr Who, making rubbery monsters) and arguable star of the 1989 film 'Elves', playing Nazi maniac Rubinkraur. Director Jeff Mandel will (I hope) be reading this out at the memorial, which sounds like something I may have dreamed. Here it is.

I only knew Mansell Rivers-Bland through his performance in ‘Elves’, which I watched upwards of thirty times between 1993 and 1995 (and intermittently since then, when the weather’s bad). My friends and I discovered ‘Elves’ in our local video store, Pegg’s, in rural England, and we were immediately hooked, forswearing the repeated, despairing demands of our female contemporaries in favour of sitting cross-legged in the dark in front of the VCR, playing, rewinding, quoting, replaying, and quoting some more while the tape rewound. As burgeoning connoisseurs of the early nineties horror genre, Mr Rivers-Bland was one of our stand-out performances in the film: a comic-book gruff-voiced Nazi in a knee-length leather jacket with a propensity for intoning ‘Heil Hitler’ before entering a room and a professional willingness to sweat when the intensity of the scene demanded it. He took it seriously, is the point, and he was eminently quotable. “You decided?” we’d say to each other, when one of us had declared that we’d spend the evening drinking cider in a field (again). “You decided NOSSSING!” Or, when we found that there wasn’t much space in the back of our friend’s car for us, our bags, and our cider, someone would inevitably say, “When zere is no more room in Hell…ze Elves shall walk ze earth!” In other words, I owe most of the successes and all of the failures of my late adolescence to Mr Rivers-Bland and his fellow cast members, director and crew. So: rest in peace, thank you, and Heil Hitler.

Email ThisBlogThis!Share to TwitterShare to FacebookShare to Pinterest
Labels: elves 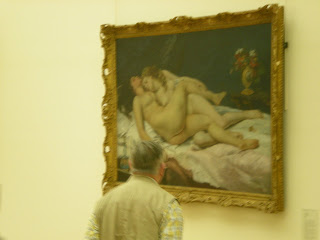 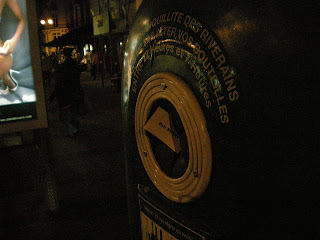 Another satisfied customer [above]
A new thing for your delight/disappointment is to be found by clicking here.
Posted by Ben Street at 11:15 No comments: