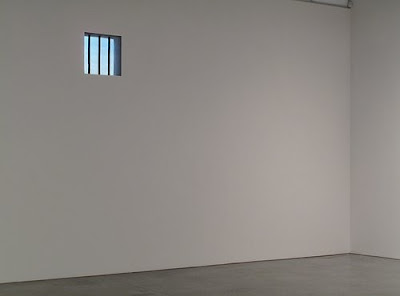 Now through the grating of my cell
I look up at a strip of autumn sky
And often, chalked across the blue,
There’s a vapour trail,
A vapour trail…
And then, I don’t know why,
I start to think of you.

Dawn brings these planes from distant lands,
Red-eyed tycoons from far-flung ports of call.
Dawn lifts the luggage through the flaps
Onto the carrousel
The carrousel
And wakes the baggage hall.
Dawn will bring you, perhaps.

Look down on me, my friend, look down
And think of me now as I think of you
And think of us as we were then
From your vapour trail,
Your vapour trail…
Your line of chalk on blue.
Think well of me again,
My friend—
Whatever hurt I may have done,
For I intended none.
Forgive the hurt that I did not intend
And let it mend. Think well of me again.
Posted by Ben Street at 16:08 No comments:

"The world knows it's a picture": Aubry Alan 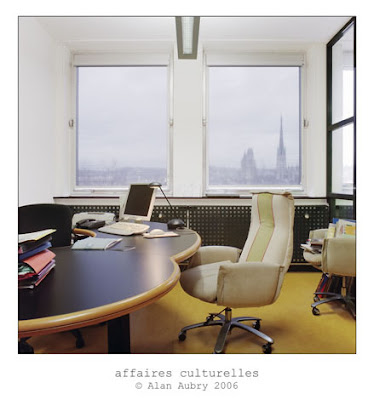 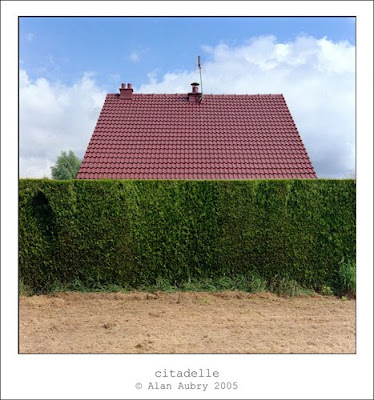 What is it, exactly, about Aubry Alan’s photography that makes it so compulsively fascinating? Not his subject matter – or not initially. Building sites, shot in series, show nondescript housing developments undergoing small changes (gravel laid down, windows put in). Road signs indicate the entrance points to Rouen – all the entrance points to Rouen. Petrol pumps – lots of those. A shed in an air base. A grey shed in an air base. Each picture seems to dare you to look elsewhere, to push the limits of what you’ll tolerate. Boring enough for you?

Yet they’re not boring. In fact, Alan’s photographs, like those of his photographic heroes Atget, Adams and Shore, remake the visible world in a way that is both faithful – the product of a restless, restlessly independent creative eye – and discreetly subversive. His 2005 works entitled Citadelle (the title, redolent of medieval walled towns, is a clue to Alan’s mischievous cynicism) show the roofs of modern housing, side-on/gable-on, poking above walls of ferociously trimmed hedges. Each roof, shot dead centre, is made to sit upon the thick strip of hedge; sky and areas of grass or soil lock those elements together, as though that was always the plan. Flattened, their geometric strata recall the banded abstractions of a Rothko or Newman, but that’s incidental. Alan’s real subject here is a photograph’s ability to estrange and destabilise ordinary sight. See how the side-on roof in Citadelle 1 has a perceptually shifting relationship to the strip of hedge (you’re never quite sure of your spatial bearings) or how that grey shed in the air base seems strangely bound in place by the faded road markings. In Alan’s images, the world seems to reshuffle itself in accordance with the camera. The world seems to know it’s a picture.

Humans leave their traces (building, travelling, working) in Alan’s photographs, but never actually appear, and the insistent, subtle ordering of his compositions implies a world emptied of the need for human presence. There’s something Marie Celeste-like in his images of the slick/sad offices of the French Department of Culture, and something correspondingly moving about its abandoned objects: those ergonomic chairs, that stack of coloured folders. Human business is suspended, and the office reforms itself into a sympathetic geometry of parallels with the cathedral spire in the misty distance. You’re reminded of Larkin’s poem Home is So Sad: ‘It stays as it was left,/Shaped to the comfort of the last to go/As if to win them back.’

See the piece on Saatchi Online here (many more Alan images available)
Posted by Ben Street at 08:48 No comments: 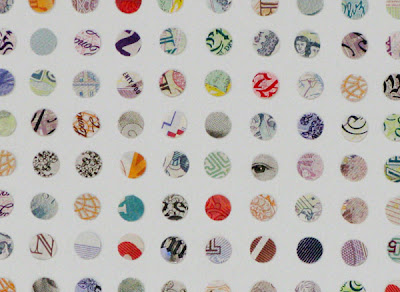 As part of this year’s Frieze Art Fair, Simon Fujiwara, the winner of the 2010 Cartier award, has conjured up a faux-archaeological Roman site, bits of which are sometimes exposed in the main body of the fair. It’s all genial and non-threatening fun-poking (there’s the unearthed house of a female collector, full of coins and an archaic handbag; you get the picture) and makes enough winking references to make the cognoscenti feel good, so it’s not much of a surprise why he won. This, by and large, is the tone of a selling event that has transformed itself into a cultural one. Disingenuous self-deprecation abounds, aimed at both the skeptical outsider and the knowing insider.

Much funnier is Annika Ström’s Ten Embarrassed Men, a group of identically dressed middle-aged actors, who huddle around en masse looking awkward, organized by the artist as a response to the representation of women in art fairs. How it really works is by providing a welcome bum note to the atmosphere of overweening economic confidence (however hyperbolic) that surrounds it. David Shrigley’s stand at Stephen Friedman Gallery is, as you’d expect, properly LOL-funny, which makes his presence at the art fair a bit anachronistic, and his appropriation by the art mainstream an ongoing puzzle. The artist himself was in attendance, painting temporary tattoos on people’s arms. I watched him slowly paint a fly on a man’s forearm. Everyone looked on, looking serious, filming on their phones.

The rest is here.
Posted by Ben Street at 16:37 No comments: 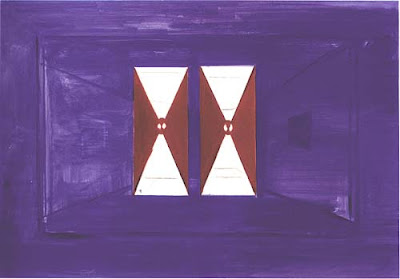 René Daniëls is a really, really good painter, maybe even a great painter, who stopped painting twenty-three years ago and has only resumed in the last two years. In 1987, he suffered a brain aneurysm from which he still hasn’t fully recovered, and some of his recent work, shown alongside his ’80s painting in the current show at the Camden Arts Centre, has a tentativeness you might expect from someone gradually returning to a loved activity. What must it be like for Daniëls, seeing his earlier paintings – richly colored, exuberant, mischievous oils – laid out here, with his more recent pieces – small-scale, scrawly felt-tip revivals of earlier motifs – dotted among them? It’s a reminder, at least, that for an artist, the past is always present, like a rebuke.

What makes Daniëls’s sudden halt so moving – and his current return so heartening, and quietly triumphant – is the sheer blazing visual excitement his paintings release. Daniëls is, first and foremost, a whipper-upper of retinal delight. His 1987 painting, The Return of the Performance, is a case in point. A zoomingly recessive perspectival space (a sort of three-walled room, like a stage set, that sometimes detaches itself from illustration and becomes, in other works, a kind of levitating bow-tie) creates a setting for the display of primary colored boxes and planes, like a painting of a Donald Judd installation made in enthusiastic recall. Paint slips and slides across the surfaces of things, just describing enough, never telling everything. In the center, a microphone stand with seven protruberances stands in a pool of milky light, and a figure peers in shadow from behind a wall, as if preparing to make a speech. The theme of performance recurs in Daniëls’s work (when human presences appear, they’re theatrical, dandyish flaneurs, as in his Cocoanuts of 1982), and the paintings themselves feel psyched-up-for, generated by nervy energy and stage fright.

Read the whole article here.
Posted by Ben Street at 12:29 No comments: 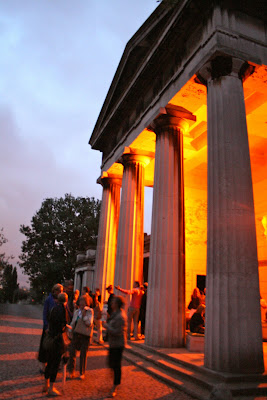 See Diana Taylor's show at Intervention Gallery. It's great. I wrote the press release (below), which probably isn't a dealbreaker, but anyway:

Taylor’s paintings all seem to refer to something being or having finished: ‘Slipping’, ‘Dropping’, ‘Fallen, Fallen’. The works themselves are littered with things caught in the process of creation, things never quite resolved. Recognisable objects – rocks, clouds, pairs of cartoon gloves – are neither here nor there, translucent sometimes, or half-described. Imagery is layered up, much of it apparently culled from the stuff of domestic cosiness: the frills of doilies, knitted letters, a crooked fence from a children’s book. Taylor’s works, then, are deeply embedded in a flawed recollection of childhood. They embody the movement of a tongue-tied mind.

Taylor’s works take time to reveal themselves, so take time. Antic marks – scuds and loops of muted colour – alternately reveal and obscure. Something is always interrupting something else: paint drools down, its descriptive purpose spent. Everything wants to be said, so nothing quite can. What makes Taylor’s paintings compelling is in their dramatisation of the push-and-pull of memory and its articulation. Bits of the past come to us at once, jumbled and imperfectly formed, a dream or truth that words can’t keep from slipping away.

The Exhibition preview features a specially commissioned musical interpretation of the works by the V&A’s resident DJ and independent music producer Alberto Miguel.

Intervention Gallery is also delighted to host as the book launch for Henji, a publication produced by art ‘zine IRP, commissioned for the Trace artist collective in conjunction with their exhibition in Hangzhou, China, earlier this year. This event coincides with the launch of Intervention’s own Reading Room of independent art and photography publications available for perusal and purchase.

http://interventiongallery.org/
Posted by Ben Street at 08:30 No comments: