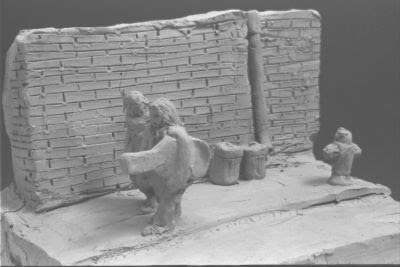 Fischli and Weiss: 'Mick Jagger and Brian Jones going home satisfied after composing ‘I can’t get no satisfaction’'

There’s a display outside one of the shops in Tate Modern, showing visitors’ comments written on little cards. That visitors’ comments are encouraged at all, let alone actually displayed in the museum, is testament enough to the transformative effect that this institution, now in its tenth year, has had on the British cultural landscape. One comment, though, in bubbly, fourteen-year-old girl writing, catches the eye above the others. It reads (with spelling errors intact): “This museum rocks! It’s soooo AWSOME!” So far, so fourteen-year-old girl. But the next bit made me laugh, then think a bit: “I hope all the artists are going to be famous one day!!!”

You almost don’t want to disavow this young visitor’s enthusiasm: clearly the works she saw (Picassos, Bacons, Richters and Rothkos) had such an immediate impact on her that they obviously were by young, upcoming, anxious artists, rather than the hoary behemoths us jaded types have stopped really looking at. My first really transformative art experiences were at the Tate, too, though in its original incarnation across the river (what’s now Tate Britain), where I saw, as a teenager, works by Bacon, Miro, and Pollock that absolutely defined what I wanted from art: a kind of visual equivalent for the outsiderish obstinacy I sought and found in music. That’s not the case now – I subsequently found an interest in milder, older art, and milder, older music – but it’s worth, I think, remembering the immediacy of that initial lapel-grabbing, electrical charge when you can. Modern art – let’s face it – will always be cool in a way that contemporary art isn’t. At Tate Modern, it’s the modern displays – the salon-hung Surrealism room, the Bacon and Picasso face-offs – that remain permanently abuzz, while the huge Beuys installation, or Arte Povera room, are as forbiddingly depeopled as towns in Western movies with a creaky saloon sign and skittering tumbleweed. Maybe the museum’s disingenuous name says more than it realizes.

Read the rest of the post here.
Posted by Ben Street at 09:12 No comments: 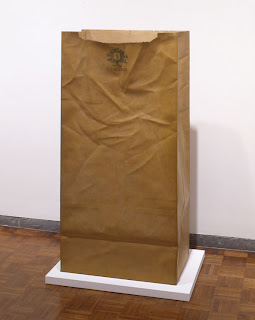 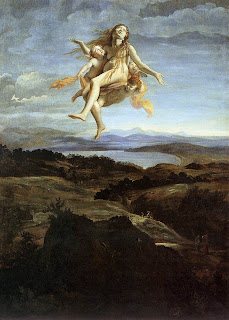 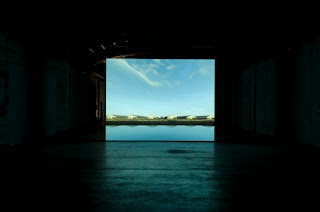 “Time-based art” is a great new contemporary art phrase to drop into conversations, with the redoubtable Orwellian tautology of “movement-based dancing” or “sound-based music.” It’s one of those phrases that sounds neat but falls apart when you try to grasp it, like a stale meringue. All cultural endeavor is, by its very nature, time-based. After all, the 400,000 year-old Moroccan “figurine” discovered in 2003 (nominally the world’s oldest extant sculptural object), which is about as far away from contemporary art discourse as you can get on this planet, is intrinsically time-based — it exists in time and cannot be experienced immediately. Nonsensical though the phrase might seem, it does represent the good intentions of curators and academics to discuss a strain of contemporary art not satisfactorily contained by the term “video art” (nor its painfully literal cousin, “lens-based art”). The urge to categorize and identify is one of those Enlightenment hangovers we thought we’d shaken off, like Corinthian columns and powdered pompadours.

A new installation by John Gerrard, an Irish artist whose work is most often described as “time-based” (there’s not a lot of precedent for what he does, and calling it “video art” or “virtual art” isn’t quite accurate), opened this week in the Canary Wharf underground station. The station is a cavernous raw-concrete and steel Norman Foster construction completed in the late 1990s, set in London’s principal financial district. Canary Wharf creates the city’s only homogenous skyline as well as a catch-all visual metaphor for the flow of international capitalism. Its spiky towers, like the busted teeth of old robots, formed a prominent backdrop to recent scenes of sacked workers scuttling for the tube, cacti under their arms. And with the installation of Gerrard’s work – commissioned by Art on the Underground, Transport for London’s excellent series of installations in and around tube stations – the subterranean becomes both literal and metaphorical.

Read the whole piece here.
Posted by Ben Street at 10:14 No comments: 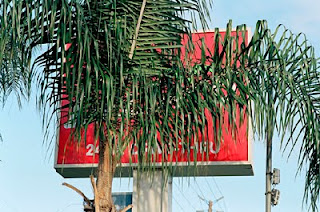 You've been kidnapped, and there's a little crack of light over there, so wriggle towards it (your hands are tied, too). You nudge open what feels like a curtain with your nose and see an ordinary street scene: shops, cars, trees. Notice how your eyes are taking everything in, feverishly. Thrumming with adrenaline, your brain is processing visual information in double time: where am I? What time is it? How far have I gone? Through the glass (there's glass) you can't hear or smell anything, either, so your eyes do all the work. That took about two seconds. (By the way: you weren't kidnapped, you fell asleep in the back of your mum's car).

Photography works like that sudden exposure of illuminated information - it literally does, and it's worth drawing back every time to those early, spectral appearances of the outside world, inverted, in camera obscuras. To paraphrase the great Eric Carmen, eyes attuned to look at photographs are hungry eyes. They need to be: every photograph is as much a no as a yes, as much a blocking-out as a revelation. Give a rat an orange and he'll gnaw every last fibre (trust me). Your eyes do the same with Beth Herzhaft's series she calls "area photographs". Each is a cropped sliver of information: life through a letterbox.

Read the whole thing (and see my top ten recommended artists) at Saatchi Online here.
Posted by Ben Street at 07:12 No comments: 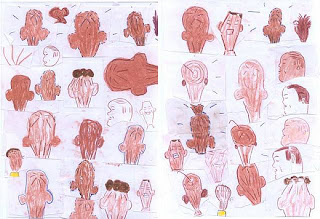 Writing about painting isn’t easy, simply because painting isn’t built to be written about. So writers writing about painting tend to rely on a checklist of clichés: the one about everyone thinking painting was dead, then (like an inverted Weekend at Bernie’s) finding out it wasn’t. Or the one about painting lagging behind other forms of art because it isn’t brainy enough. Or the one about painting being challenged by photography, or besieged by video art, or troubled by conceptualism — all ideas that bespeak a kind of insecurity on the part of art writers who can’t quite believe that a form of creation much older than the novel (that other persistent hanger-on) and almost as old as fire and shelter (also still quite popular) continues to be made by otherwise perfectly nice, intelligent, and right-thinking human beings.

Carry on here.
Posted by Ben Street at 16:18 No comments: