On the unheimlich scupture of Hyesoo You 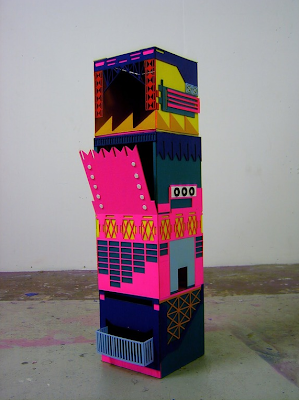 Hyesoo You’s mixed-media sculptures very nearly remind you of something. Not of other artists, especially, although somewhere in their genetic past they must have at least crossed paths with Ashley Bickerton (for their occasional blasts of neon), or Phillip King (for their cheery plasticity), or Anne Truitt (for their nimble strut between industrial minimalism and candy-striped décor). Rather, they resemble the abstracted logos of family-friendly organisations: Happy Eater’s bulimic PacMan, for instance, or the shaggy young buck on the Happy Shopper sign. That unnerving disconnect between the word ‘happy’ and the wild eyes and mad maw of its representation must be lodged deep in the head of any child that sees it, and You’s work, if unconsciously, picks up on this deep-seated anxiety, the strange and unpredictable fears of children. Stripping these dimly familiar forms of any textual allusion, You sidesteps the spent pop tradition to make sculptures that resonate both visually and physically. They’re pictures, in other words, and things, too.

You’s Love III (2011) is a two-part painted sculpture that sits, Brancusi-style, in delicate visual balance on a plinth. A large black circular form – or, really, a circle within a larger semi-circle, a blunted arrowhead – above a much smaller striped one. It can’t help but seem anthropomorphic, a part-silhouetted cartoon of a girl with a bob, or a soldier in a tin helmet. Its humanness, though, is alarming. Featureless and limbless, unmoored from its implied commercial context, the thing sits, both staring and not. Its physicality as an object is unheimlich in the way Freud meant it: this thing is in your world, taking the place of things you know and understand. Bouncing your attention back by refusing to quite explain itself, You’s piece has a kind of mild but unsettling sense of provocation, a thing in a dream that keeps coming back. It’s like Ad Reinhardt’s Ab Ex cartoon made real: “Ha Ha! What does this represent?” says the sceptic. “What do you represent?” replies the picture.

If Love III is a sculptural picture, Future of the Past (2010) is an architectural one. Four stacked units done in blazing dayglo colours make nodding reference not to actual buildings but to pictures of buildings. Simplified balconies, fireplaces and windows are interspersed, and architectural languages are jammed together with a jaunty irreverence: medieval swallowtail battlements bump up against hi-tech lattices and crossbeams. In common with You’s practice as a whole, Future of the Past stops short just before it can be fully explained – the artist’s taste for abstractions in titles attests to this. Not quite a building, not quite a sculpture, not quite a picture, You’s work oscillates between categories and dances away, like a word read in a dream that you can’t quite say out loud.

Piece published on Saatchi online. See it here, plus my top ten Saatchi Online artists.
Posted by Ben Street at 09:11