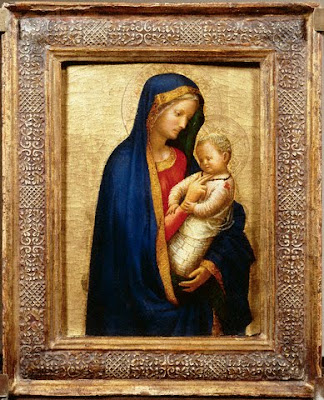 "At the risk of belaboring what is obvious, I must address myself to the many who still habitually mistake pictorial symbols in Renaissance art for descriptive naturalism. To take one example: At the sight of an infant Christ touching the Virgin's chin, they will admire the charm of a gesture so childlike, playful, affectionate. They are not wrong, but I think they are satisfied with too little. For the seeming artlessness of what I shall call the chin-chuck disguises a ritual form of impressive antiquity. It is first encountered in New Kingdom Egypt as a token of affection or erotic persuasion. In Archaic Greek painting the gesture is given to wooers, and it occurs more than once in the Iliad to denote supplication. In Late Antique art, the caress of the chin is allegorized to express the union of Cupid and Psyche, the god of Love espousing the human soul. And the gesture proliferates in medieval art into representations both of profane lovers and of the Madonna and Child. Thus no Christian artist, medieval or Renaissance, would have taken this long-fixed convention for anything but a sign of erotic communion, either carnal or spiritual. By assigning it to the Christ Child, the artist was designating Mary's son as the Heavenly Bridegroom who, having chosen her for his mother, was choosing her for his eternal consort in heaven".

[Leo Steinberg, The Sexuality of Christ in Renaissance Art and in Modern Oblivion]