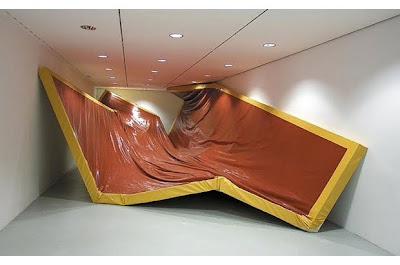 The Otolith Group ought to win this year’s Turner Prize, if their installation at Tate Britain is anything to go by, which it isn’t. Tate Britain’s press department must really enjoy having to explain annually that the prize is not awarded on the installation at the Tate (it’s for any show they’ve done over that year), but it’s unavoidable that the public – or, at least, those members of the public not used to the art fair/biennial Wurlitzer (i.e, the sort of people who use the word ‘public’ as though it doesn’t apply to them) – won’t follow that the thing you’re looking at isn’t the thing that wins. That’s good news for Angela de la Cruz, though, whose room was guest curated by Stevie Wonder. Works that looked ballsy, rambunctious, and endearing at her Camden Arts Centre show this year (reviewed here), hung haphazardly, look like the underdone Steven Parrino bootlegs they’re always being accused of being. Decisive or not, the duff hang does a good painter a disservice, and if she wins it’ll look like willful pretension by the judges, because it’ll look like that particular installation won it for her, which it won’t have done. But the Tate press department won’t be in a position to explain by that point, having all emigrated to Latvia and had their names changed.