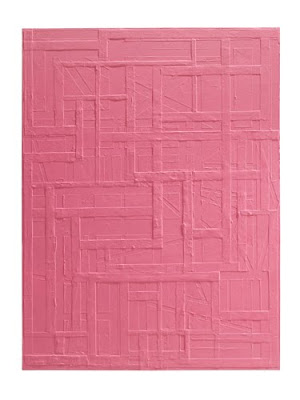 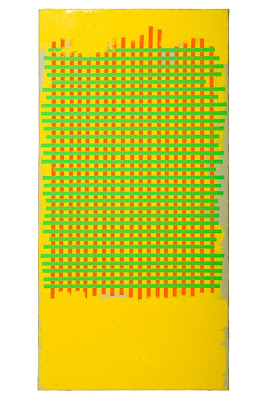 The elephant in the room is, of course, the late Mondrian: those zinging strips of gridded tape as cool paeans to modernity. Michael Callaghan's work - like that of many contemporary neo-abstractionists, such as Tomma Abts, Mary Heilmann, and Mark Grotjahn - negotiates that great oxymoron, the modern past. This generation is by no means the first to tweak pre-war abstract utopias in its own terms (just think of the blaring neon of 80s Neo-Geo, not to be seen at a gallery near you), but there's a tentative, reticent approach to Callaghan's work that's very much of its own uncertain time. You could say that what Callaghan picks up on in Mondrian's work isn't the hard geometry of its reproducible aesthetic: it's the snicks and lumps of the real objects themselves. Run a hand across a slick, maths-textbook Mondrian (don't, actually) and you'd feel an unexpected, almost gnarly roughness. Callaghan's paintings make that contradiction - the neat and the messy, the flush and the relief - their principal subject.

Take 'Untitled Pink'. What at first glance resembles a monochrome abstraction slowly reveals layers of tape, like demented plumbing or the trails of a frantic game of 'Snake 2', laid over a faintly triangular abstract grid. Callaghan's work slows the eye by delaying resolution. Each layer doesn't quite say everything; each is held together by toned-down, organic colour, and pulled apart by its own zigzagging rhythm.

Callaghan's paintings make their own space through layering and gouging, but they're about space, too. Many of his works recall a kind of urban topography, fossilised in thick layers of tactile acrylic. 'Untitled White' has all the obsessive carving-out of human movement you'd find in urban planning schemes in the eighteenth century. Strata of geometric decisions obliterate each other, clamouring for authority. Callaghan's work toys with macrocosmic organisational schemes, undermining them through a knowingly rambunctious, dog-eared application: dreams described by a drunkard.