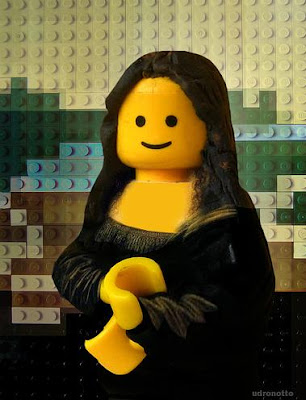 Last Sunday, a Russian woman walked – stamped - through the galleries of the Louvre in Paris carrying a small ceramic tea cup (empty), which, on arriving in one of largest galleries and steadily elbowing her way through the crowd, she threw, firmly and decisively, at Leonardo da Vinci’s Mona Lisa, whereupon the cup splintered into pieces on the inch-thick security glass and five guards slammed the Russian woman to the floor as the encircling cameras strobe-lit the scene. For the four and a half minutes it took for the Russian woman to be manhandled upright and marched towards the Louvre’s security offices at the rear of the building, the Mona Lisa was entirely unwatched. For four minutes, it was just a painting. Then, crunching over the broken crockery, the crowds returned, like a sigh.

The Mona Lisa is not a well-looked-after painting. Its presentation – hung over average eye-level, in a rectangular recess in a huge floating wall, behind a screen of bullet-proof glass, in front of a projecting wooden shelf, behind a semicircular railing, guarded by two museum attendants – and its trumpeting in the museum itself – announced in black-and-white reproduction on a series of signs with a big black arrow which lead straight past the Nike of Samothrace and paintings by Uccello, Mantegna, Titian and Veronese – suggests that the Louvre has been commandeered by its own PR department. At the audioguide desk, you can pick up a special guided tour narrated by the actor Jean Reno, as his character from The Da Vinci Code. “In theees room,” he hisses, sexily, “is zee greatest meeestery of all”. Can we feel just a tiny bit of sympathy for the Russian woman?

The Russian woman’s protest (she had recently been denied French citizenship) is another addition to the long list of damaged or destroyed works of art. When suffragette Mary Richardson took a knife to the back of Velazquez’s Rokeby Venus in 1914, or when the young Tony Shafrazi spraypainted “Kill Lies All” on Picasso’s Guernica in 1974, or when the Taliban dynamited the Bamiyan Buddhas in Afghanistan in 2001, they were reacting to an image’s power to enthral. In effect, attacks like these restore an image’s potency: they shock them back to life. That’s not to endorse vandalism of works of art - although I’ll distract the guards if anyone fancies slashing a pre-Raphaelite - but such events give the lie to Walter Benjamin’s notion that reproduction diminishes the ‘aura’ of a work of art; we still hanker after an original source, the relic in the jar.

The questions that these acts of vandalism raise are the core of what Dave Hickey (in ‘The Invisible Dragon’) calls the ‘therapeutic institution’ – what he describes as the ‘loose confederation of museums, universities, bureaus, foundations, publications and endowments’. The notion explicitly (in wall-texts, education programmes, outreach projects, young members’ programmes, corporate sponsorship and online facilities) and implicitly upheld by such institutions is that art is good for us, ‘regardless’ (Hickey again) ‘and in spite of the crazy shit that individual works might egregiously recommend’.

We might be quick to condemn acts of vandalism on works of art, and we should. At the same time, though, we ought to consider why and how works of art are able to disturb, rather than affirm, our most deeply-held notions about public virtue, about the benevolence of beauty.