James Perry Wilson and the Wolf 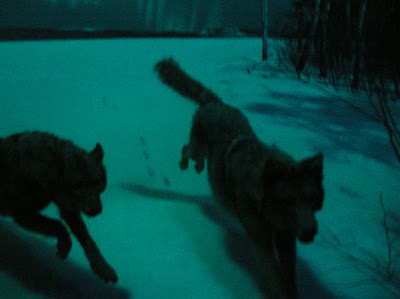 In an interview this month with Calvin Tomkins in The New Yorker, the contemporary painter Walton Ford (see his stuff here) describes this scene as "one of the most beautiful things in New York". It's the diorama of grey wolves running through the snow by Gunflint Lake, Minnesota at the American Museum of Natural History, New York, created by James Perry Wilson (1889-1976). Wilson was a former architectural draftsman legendary among museum diorama designers (and museum diorama aficionados) for his extraordinary ability to create convincingly receding space on the curved wall of the backdrop. (It was making the bit where the curved back bit and the tilted front bit met segue together smoothly that made Wilson a legendary figure in the world of the diorama).
I was reminded, looking at this, of Frederic Remington's great painting 'Moonlight, Wolf' from 1909 (see it here) - it has that very American 'Walden'-esque sense of romantic loneliness and melancholy. But the main thing is the hold these scenes have on the young imagination. Think about all the nightmares these things have prowled into.
Posted by Ben Street at 14:27